The Prince Of Tennis

The Prince Of Tennis (Japanese: テニスの王子様 Hepburn: Tenisu no Ōjisama?) is a Japanese manga series about a tennis prodigy written and illustrated by Takeshi Konomi. The title is often shortened to TeniPuri (テニプリ?), a portmanteau of the two parts in the Japanese pronunciation of the words "Tennis Prince".

The series is primarily set in Tokyo, and centers around Ryoma Echizen, a tennis prodigy who attends Seishun Academy (青春学園 Seishun Gakuen?), or Seigaku (青学?) for short, a private school famous for its strong tennis club and talented players. Ryoma quickly defeats numerous upperclassmen shortly after entrance to secure himself a spot as one of the team's regulars. In pursuit of their ultimate goal of winning the National Middle School Tennis Championship, members of the team make new friends while learning and mastering increasingly complex techniques. Ryoma also begins to develop his own style of tennis, and eventually realizes what the sport really means to him.

The New Prince of Tennis is set shortly after the end of the original manga. Ryoma returns to Japan after his trip to America as a candidate for the Japanese U-17 (under 17) High School Representatives Selection Camp, along with 50 other middle school tennis players. They begin a new adventure there.

The purported advertisement from the Jump Square issue says that everything in The Prince of Tennis up to now has been "prologue" and that "a new legend for [the main character] Ryoma and the others will begin." 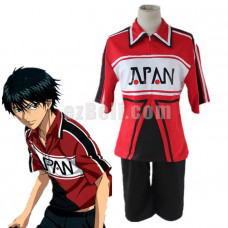